The History of Essex County LBC 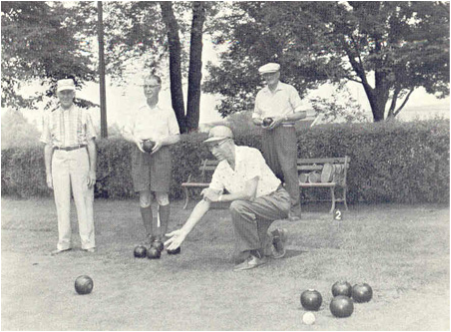 Essex County Lawn Bowling Club is located in beautiful Watsessing Park on Glenwood Avenue, Bloomfield NJ. It
was founded in 1924 and at that time had around 100 members. The large membership continued at around 100+ until the mid 1980’s when some of the aging membership retired to Florida and Arizona. Due to the financial difficulties in
the parks system in the early 1990’s, and the lack of membership at that time ( around 30 ), the club and parks department jointly decided to abandon the small green. In 1996 care of the green was at it’s lowest and it suffered severe
neglect. An attempt to repair the problems in 1997 left our green totally unplayable.

From 1970 - 1994 the Essex County Club was known to have the best green in the Eastern Division. The division at that time had over 25 clubs from Niagara Falls New York to Williamsburg Virginia. In 1978 and 1984 the Essex Club, along with NY Central Park and Trenton New Jersey, hosted the Annual ALBA National Tournament and hosted bowlers from South Africa, England, Scotland, Australia, along with United States bowlers from as far away as Hawaii. Every year one of the 9 major Eastern Division tournaments was scheduled at Essex until the green became unplayable. 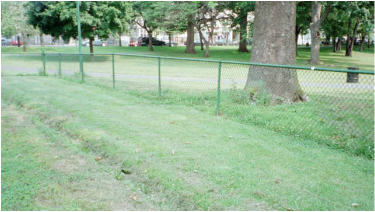 Essex Green in 1999 which became unplayable due to crab grass and lack of regular maintenance.
In 2004 the Essex County Parks Department requested that they install an artificial playing surface to reduce maintenance costs. Though the green has suffered some problems since its installation, we currently have an exceptional playing surface and will host the Northeast Pairs Play-downs and Division Open in 2012.

Each year the Essex County Club, and other clubs from around the Northeast Division are contacted by tour groups from
the UK to arrange bowling matches at greens in the United States. As Essex County Lawn Bowling Club is the only active club in New Jersey it is a favorite destination for many of our foreign visitors, many of whom have been to NJ before.

Our green is well known overseas thanks to the play of some of our  members. Skip Arculli, Duncan Farrell and Michele Arculli have represented the United States and Essex County overseas on numerous occasions. Skip Arculli was a Gold medal winner at the 1982 World Championships held in Scotland. They are still active in the sport at the local and international level. Club President Colin Smith has represented the US against Canada on 2 occasions. The Essex Club still holds the United States Challenge Cup which it has successfully defended on numerous occasions.

The green is a sand filled artificial surface of 120’ by 108’ which is surrounded by a sand filled ditch 8 inches wide and 5 inches deep. Around the green is a standing area of about 4-6 feet and the entire bowling area is enclosed by an 8’ high fence. The green is also equipped with lighting to enable play in the evening. The club has a building adjacent to the green which is used as a clubhouse. It has facilities for both men and women and is used to house bowling equipment and lockers for members to keep their bowls. 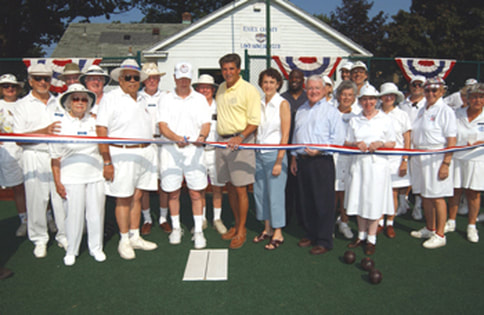 Bloomfield, NJ – Essex County Executive Joseph N. DiVincenzo, Jr. welcomed the sport of lawn bowling back to Essex County on Saturday, August 18th when he officially dedicated the refurbished lawn bowling green facility in Watsessing Park. After being played in the park for generations, the lawn bowling facility was closed five years ago because of maintenance issues.
“The lawn bowling green is a feature that is unique to Watsessing Park and has attracted high caliber players from around the world to Essex County,” DiVincenzo said. “The Watsessing Heights Neighborhood Association and the Watsessing Park Conservancy have been strong advocates for their park and recognized the importance of restoring this great facility. With our new, modern facility, hopefully we can encourage a new generation to learn and enjoy the
sport of lawn bowling,” he added.

Players returning to the Essex County lawn bowling green on Glenwood Avenue in Bloomfield will compete in a state-of-the-art facility that has a synthetic grass playing surface, new fencing and a renovated field house. The project cost $205,000 to complete and was part of a $902,000 project that also included upgrades to two basketball courts, renovations to the historic bandstand and repairs to restroom facilities in various field houses. The other work was completed in July before the Watsessing Heights Neighborhood Association and Watsessing Park Conservancy hosted their inaugural Gala Independence Day Celebration at the Bandstand on July 3rd.

“Lawn bowling has been missing in New Jersey and we’re glad to be back,” said Colin Smith, President of the Essex County Lawn Bowling Club, referring to the Watsessing Park Lawn Bowling Green being the only facility in New Jersey. Skip Arculli, also an ECLBC member, was ecstatic about the restored facility. “This is going to be the best bowling green in the Northeast and we should be proud to call this our home green,” he said.

Lawn bowlers were a common sight in Watsessing Park for almost three quarters of a century. About five years ago, however, maintenance of the facility declined as Essex County cut its parks and recreation budget because of
financial constraints. The facility eventually was closed.

The Watsessing Park renovation project was funded with $500,000 from a 2003 Multi-Parks Improvement grant from the New Jersey Green Acres Program and $500,000 in matching funds from the Essex County Open Space Trust Fund.

In 2004, Essex County began a partnership with the Watsessing Park Conservancy, a subcommittee of the Watsessing Heights Neighborhood Association. The Conservancy teamed with the County this year and submitted an application to
the New Jersey Green Acres Program. It is scheduled to receive a $500,000 grant that will be used to fund future improvement projects.

In 2003, Essex County completed a $65,000 beautification project at the Bloomfield Avenue entrance to Watsessing Park. New sidewalks, decorative park pathways and landscaping improved the entrance, making it more inviting. In
addition, upgrades were made to the drainage system, park trees were trimmed, and the restrooms and senior room were painted. Essex County also invested about $220,000 to install rubberized safety surfaces in the three playgrounds in the park last year.

Past Club Presidents
Powered by